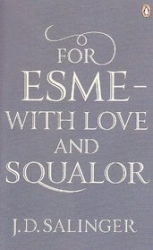 For esme : with love and squalor / J.D. Salinger

Abstract: "For Esme With Love and Squalor" includes two of Salinger's most famous and critically acclaimed stories, and helped to establish him as one of the contemporary literary greats. The title story recounts a Sergeant's meeting with a young girl before being sent into combat. When it was first published in "The New Yorker" in 1950 it was an immediate sensation and prompted a flood of readers' fan-letters. 'A Perfect Day for Bananafish' is the first of the author's stories to feature the Glass family, the loveable and idiosyncratic family who would appear in much of Salinger's later fiction. A haunting and unforgettable piece of writing, the story follows the eldest sibling, Seymour Glass, and his wife, Muriel, as they embark on an ill-fated honeymoon in Florida. 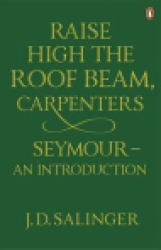 Abstract: First published in "The New Yorker" in the 1950s, "Raise High the Roof Beam, Carpenters and Seymour: an Introduction" are two novellas narrated by Buddy Glass, a character often said to be a portrait of Salinger himself. In the first, Buddy has taken leave from the army during World War II to attend the wedding of the eldest Glass brother, Seymour, and an atmosphere of portentous suspense sets the scene for the tragedy that will follow. In the second, Buddy reminisces about Seymour and the novella unfolds into a deep and far-reaching exploration of a complex and sad character which displays all the tenderness and subtlety which distinguish the best of Salinger´s writing.

Abstract: Volume containing two interrelated stories by J.D. Salinger, published in book form in 1961. The stories, originally published in The New Yorker magazine, concern Franny and Zooey Glass, two members of the family that was the subject of most of Salinger's short fiction. Franny is an intellectually precocious late adolescent who tries to attain spiritual purification by obsessively reiterating the "Jesus prayer" as an antidote to the perceived superficiality and corruptness of life. She subsequently suffers a nervous breakdown. In the second story, her next older brother, Zooey, attempts to heal Franny by pointing out that her constant repetition of the "Jesus prayer" is as self-involved and egotistical as the egotism against which she rails.