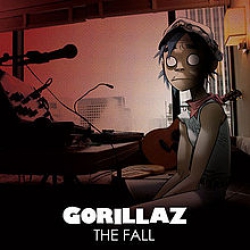 Abstract: The Fall is an album from British virtual band Gorillaz. The album was officially announced on 20 December 2010[11] and soon after released on 25 December 2010 as a "free" download on the Gorillaz website, exclusively to fans in the band's Sub-Division fan club.[12] The entire album was recorded on group founder Damon Albarn's iPad during the American leg of the Escape to Plastic Beach World Tour in October 2010 and mixed in England by Stephen Sedgwick.[13][14][15] The album features fewer guest artists than previous Gorillaz albums; collaborators include Mick Jones and Paul Simonon of The Clash and Bobby Womack. The "Phoner to Arizona" music video, a compilation of footage and images taken from the tour and the phase was posted on YouTube on 22 December. The album was physically released on 18 April 2011 (Wikipedia)