Abstract: Let's check Miss Chang's residence. Someone there might know whether or not Loo knew her better than he says he did." Mary Chang, when she was alive, ... 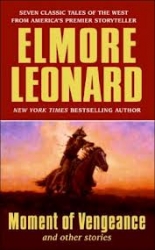 Moment of vengeance : and other stories / Elmore Leonard

Abstract: Before he brilliantly traversed the gritty landscapes of underworld Detroit and Miami, the incomparable Elmore Leonard wrote breathtaking adventures set in America's nineteenth-century western frontier—elevating a popular genre with his now-trademark twisting plots, rich characterizations, and scalpel-sharp dialogue. There is a moment when obsession, rage, and destiny come together at the end of a shotgun barrel—when wrongs, actual or perceived, are addressed with violence, and the awesome power of life or death rests in a trigger finger. In seven magnificent stories of sins, crimes, conscience, and savage retribution, the New York Times-bestselling master carries us back to an untamed time and place where a simple transgression most often proved fatal . . . and the only true justice lived in the hands of the gunman.