Abstract: Skeleton Tree is the sixteenth studio album by Australian rock band Nick Cave and the Bad Seeds. It was released on 9 September 2016 on Bad Seed Ltd. A follow-up to the band's critically acclaimed album Push the Sky Away (2013), Skeleton Tree was recorded over 18 months at Retreat Recording Studios in Brighton, La Frette Studios in La Frette-sur-Seine, and Air Studios in London. It was produced by Nick Cave, Warren Ellis and Nick Launay. During the sessions Cave's 15-year-old son Arthur died from an accidental cliff fall. Most of the album had been written at the time of Cave's son's death, but several lyrics were amended by Cave during subsequent recording sessions and feature themes of death, loss and personal grief. (Wikipedia) Abstract: Live from KCRW is the fourth live album by the Australian alternative rock band Nick Cave and the Bad Seeds. It was released on 29 November 2013 on Bad Seed Ltd. The album features a live radio session recorded for KCRW on 18 April 2013 at Apogee Studio in Los Angeles, California, United States. The session, which featured a stripped-down line-up performing songs from the band's back catalogue and their most recent release, Push the Sky Away (2013), was recorded by Clearmountain. Live from KCRW was released on CD and double LP, as well as a digital download. The album will be rereleased in a forthcoming digital deluxe bundle of Push the Sky Away. The double LP features two exclusive tracks, "Into My Arms" and "God is in the House", which were excluded from previous radio broadcasts of Nick Cave and the Bad Seeds' KCRW session (Wikipedia) 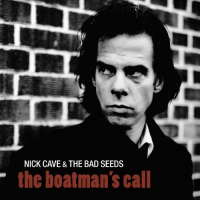 Abstract: Live at the Royal Albert Hall is a live album by Nick Cave and The Bad Seeds, released on 24 November 2008. It was recorded on 19 and 20 May 1997 during the tour for The Boatman's Call and eight of these tracks (plus a version of "The Weeping Song") were originally released as a nine-track bonus disc for The Best of Nick Cave and The Bad Seeds. It features a version of "Where the Wild Roses Grow" with vocals by Blixa Bargeld, which is delivered in a way that is similar to the demo version that can also be found on the B-Sides & Rarities three-disc set. These live recordings display the more mellow sound and performances that the group had been showcasing at that period, and would continue to deliver in the later No More Shall We Part. (Wikipedia)